With @mchiudinelli33 aka the MC at practice. We got a walkover for our doubles! Got to work on our game instead! 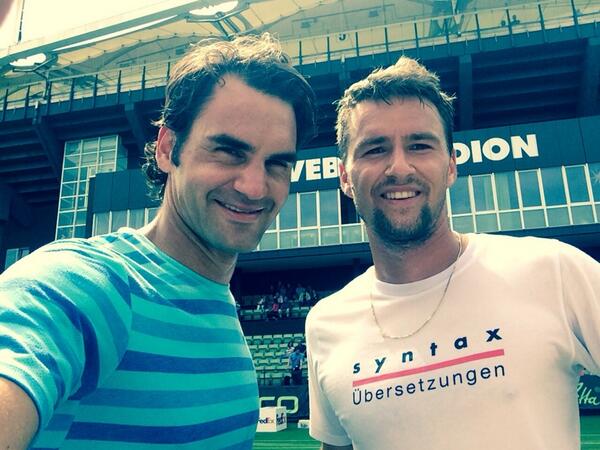 Thanks to everyone for coming to our practice today! Can you spot me? #fullhouse #rfcap 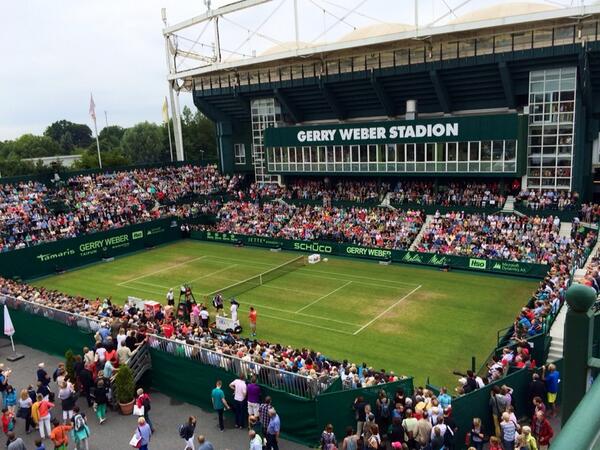 Question: How do you feel after this difficult start in the first set?

FEDERER: A little bit of struggle on the return maybe for a set and a half. And after that I think I started to return better, make more returns off the first serve, had more variations as well on the second serve return. My own serve I thought was consistent, it was solid. He didn't really have much of a chance. So, that’s the think you have to control. It was slightly frustrating at times clearly, but nevertheless I served well and kept on doing my thing. So, it was important to stay calm and actually I think it gives me more confidence winning this way than maybe just 6-4, 6-4 and you don't quite know what is going on. Like this I had to stay calm, fight through the match and find a way and then the last set and a half were much better. So, I'm actually pretty happy now.

Q: Is the transition from clay to grass difficult for you?

FEDERER: Normally not so much to be quite honest. I think today it was just a bit of a return thing issue more than anything. But I must say, the first day when I came here to practice it was a bit so, so, and every day after that was very good. So, I’ve been very happy how I’ve been practicing and also pretty pleased now at the end. So, for me it doesn’t take a whole lot of time to get used to grass thankfully.

Q: For the return issue: What’s the problem, technically?

FEDERER: I think it’s about getting used to the Centre Court a little bit, knowing where it bounces how exactly. That sometimes can take a while and then for me it was just really the details. Shall I try to come over? Shall I chip? Shall I play aggressive? Shall I play short? Shall I play long? You know, I had a lot of things in mind and I decided to return aggressive in the beginning and many times I didn’t quite make many returns. And when I did have the opportunity I was in two minds. So, that is not something that is going to work very well. But at least I was mixing the return and that was the only positive to take out of the first set. I wasn’t just trying to make the returns and just not making them, at least I was trying to go for it which is a good thing.

Q: Was there a time when you thought ’gosh, I might lose this match’?

FEDERER: Of course, in the first set after the tiebreak. I was 6:3, 6:4 down and thought 'now, things look better' and then I lost the set in the end. That is disappointing, but the tournament, the match was not yet over. But there is a moment when you think ‘it won’t take much, just a stupid break and maybe things won’t work that well on my serve.’ Then, maybe you become a bit, not careful, but a bit wary what will happen. Then my reaction was ‘now, I want to break it.’ But unfortunately it didn’t happen. But then I saw that it will be difficult for him to break me and just get ahead. I had the feeling that he would have to play the tiebreak. Honestly, I knew that I will get into the return games eventually and create my chances. And that was also the case. I created ample of opportunities. Then, in the third set after the first break I didn’t have any more doubts.

Q: After you lost in Paris you said ‘I've already forgotten about Paris and am on grass mentally’. Was that really the case? Did you mentally switch to grass so quickly?

FEDERER: Yes, I think when you are very disappointed it is the only correct option. You should analyse a bit but not too much since it's not going to be for another ten to eleven months before I go back on clay. I was very disappointed and really didn't feel like thinking about it anymore because I just wasn't happy with my performance. Things hadn't gone well like in Indian Wells or Miami or in Rome. And I just had enough of this kind of matches. It was easy for me to flip the switch.

Q: What will you take from today’s match for the match tomorrow?

FEDERER: It’s always somewhat of a disadvantage to have a long match because then you’re a bit tired. I will also play doubles later. But honestly I could wait until today before having to play my firsts match. So, I really don’t have any concerns. I think it’s positive that I played more today and will play doubles latter. I have to get used to these conditions very well and fast. There won’t be any rallies in the doubles match later. It will be ricky ticky (laughs), return volley point finished or serve volley point finished. So, I can prepare for the match against Karlovic tomorrow should he win. And should Lu win I will have to adjust in the sense that there will be more base line duels. We'll see. But I think it's positive that I spent more time on the court today.

Q: At the age of 32, do you slowly come to the phase where you really enjoy playing the tournaments? You have enough money, all titles ...?

FEDERER: Enough children, right (laughs)? No, it really is the case that you see things much more relaxed. That's normal. It is a very cool period at the beginning when you start playing the players you know from the TV. It’s a very special phase for a player. Than you need to hold your ground. That’s also cool because you win a lot but you're up to your ears with work. You also need to say No, can't be everywhere, a photo shoot here and there somebody needs you for a cover shoot and you can't say No again. So, it's a bit of both. And later you know there are others’ who will do that and you can concentrate on playing tennis again. Of course also on the family. And also I know everything so well now. Wherever I go I'm a returning guest. That's also nice that everybody knows me. Over the years, I was able to make friends which wasn't the case at the beginning. I went to New York for the first time only travelling with my coach, that's it. And later you're happy to get twenty or thirty tickets so your friends, pals or colleagues travelling with you or who have moved to New York in the meantime can come and watch you play. So, things have changed tremendously. Therefore, I'm much more relaxed because I know my way on the Tour, know all the players, there are hardly any new things which is exciting at the beginning but also a bit stressful.

Q: You said you were more relaxed but with respect to last year's Wimbledon don't you feel that the pressure is on to do better?

FEDERER: Yes, of course. It reminds me a bit of 2002, 2003. I lost the first round in Wimbledon iin 2002 against Ancic and was able to win Wimbledon in 2003 and I had also come from Paris being really disappointed. I had lost Paris in the first round in 2003 and just told myself that I really don't feel like thinking about that match because I had completely underestimated my opponent. Mentally, I wasn't prepared to talk to the media unless necessary, I won't read anything about it and then I won Wimbledon. I don’t have the feeling that I’m in the same phase now because I feel much better than back then because I didn't have a clue how successful I would be. However, for sure there is some pressure and the will to play well and successful. I am highly focussed, will enjoy when I'm off court with my family or having dinner with colleagues, then I'm relaxed. But otherwise I know perfectly well why I'm travelling on the Tour, why I go onto the court and why I have this drive and that being focused is very important in order to play well. Therefore, I am aware of that and I'm not on the Tour for the sake of just being there. That's not good enough.