Q. Obviously backhand was off tonight. A lot of errors. Unusual for you. What was the problem out there? He was playing well, obviously.
ROGER FEDERER: Yeah, it was a tough match. Look, it's no secret I've struggled the last, what is it, five matches I've played here in the States. It's disappointing, I think, my performance overall, if I've got to analyze right now after the match.
But I fought as much as I could under the understood circumstances with my game having issues at the moment. Definitely lack timing. I don't know where that comes from because I played so nicely in Australia. So it's disappointing to not be able to back it up.
Maybe the sickness did take it out of me more than I thought. Maybe the break was quite long. I'm kind of used to those things, and I still, you know, think I could have done much better.
I was a couple points away this week and then also in Indian Wells had my chances. It's disappointing having had a chance to move on. Maybe I had a chance to sort of turn around my game.
But, you know, we'll see how it goes forward.

Q. What will you do to step back and assess this one?
ROGER FEDERER: Well, this is not stuff you can go too harshly on yourself. I tried everything I could out there. I thought he played a good match. It's hard to judge his performance, because I look at mine only.
When I'm not playing my best, it's hard to judge my opponent, to be quite honest. But he's a good player, so I knew the danger coming in, especially with the timing issues I've had already the last couple weeks.
But I thought I worked hard enough to iron those things out. Maybe I did. It was still the confidence lacking, and that's what kind of cost me these last two tournaments.
Only fuels my desire to go back to the practice courts and come back even stronger. I don't like to lose these type of the matches.
I'm looking forward to the clay court season now. It helps to kind of move on to a different surface. Then this has nothing to do too much with the clay court season, and that helps.
So I'm looking forward to that. Definitely need to practice harder, and that's what I'll do.

Q. Your first match you said that you felt the conditions were a bit strange and the balls were flying all over the place. Do you think that was the case tonight as well, or was it different?
ROGER FEDERER: I'm a bit confused with how I'm feeling the ball at the moment. Sometimes it flies and sometimes it doesn't. It's a lot to do with how you feel at the moment.
Tonight it definitely felt really slow. Normally Tomas or myself serve around 10 to 20 aces a match. It was almost impossible to get it past the other guy, you know, with the serve.
So conditions are so slow sometimes here, and then during the day they fly like crazy. So I guess it's got something to do with the conditions, but the issue is really my game. The conditions, usually I get used to those after a couple matches at the latest.

Q. Berdych, you've known a lot years that he has top 10 talent, right?
ROGER FEDERER: I would think so.

Q. What is it, consistency you think?
ROGER FEDERER: Yeah, if you look at the top 10 the last years, they've always been tough. It's not so easy just to get in there and hang around, you know, just think it's normal to be in there.
It definitely needs a special effort and a special sacrifice, and, you know, then you need some serious mental skills to handle the traveling and everything. It's not so easy. With different surfaces and injuries, it's demanding.
Or you do it the easy way and just win a big one. Then you're in if for a little bit and then you get better chances and seeds. But I would have thought he would have made his move a long time ago to be in the top 10.
Seems like he's coming back strong. That's good to see, because he's and incredible player and he's got incredible shots. Almost let this match off the hook again. He got lucky tonight.

Q. Did you think after you won the second set that you were then gonna win the match at that point?
ROGER FEDERER: Well, I thought it was back to even, if not maybe a slight advantage for me because I had the momentum.
It was a huge opportunity for him to maybe snatch victory in straight, because I kind of handed him the first set. Then in the second set I had so many chances it felt like I was gonna hump me at the end and then he didn't, so I was kind of happy with that.
Look, I never felt great the whole night. I just fought with what I had. I knew it was gonna be a tough third set, because thank God he wasn't in too many of my service games in the second set, which made it a bit easier for me to relax and concentrate on the return games.
But, look, I had tons of chances at the end. Match point was my serve, I mean, what more can I do? I tried everything I could. It's just not happening for me at the moment. 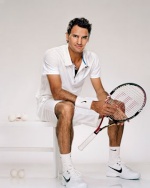 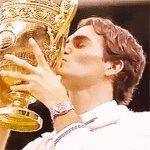